Published by Center for Regional Development on June 4, 2019

The Federal Communications Commission recently released their latest broadband deployment report using data from December 2017. Internet providers are required to file a report using form 477 twice per year on broadband access. While this dataset is known to have issues, including being carrier self-reported, 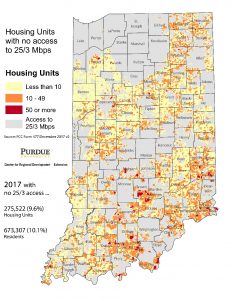 not granular enough (aggregates housing units into Census blocks), and showcasing advertised rather than actual speeds, it is the only broadband-related dataset available for the United States.

This dataset includes among other metrics, broadband technology available in that particular Census block (DSL, Cable, Fiber, etc.) as well as maximum advertised download and upload speeds. This in turn allows us to map the current broadband definition of 25 Megabits per second (Mbps) down and 3 Mbps up, or 25/3 for short, footprint for the state of Indiana.

A pattern is visible where towns and cities do have access to advertised 25/3 but the surrounding areas in that county do not. For example, notice Rush or Knox counties.