(June 13, 2019) – The straightforward title of a new United Nations report, The Age of Digital Interdependence Report, perhaps says it all: People no longer just want access to a digital world, they need it. That is especially true for vulnerable populations that could benefit in immediate and important ways.

Melinda Gates, co-chair of the Bill & Melinda Gates Foundation, and Jack Ma, founder of Alibaba, served as co-chairs for the High-Level Panel on Digital Cooperation, which handled the report. In the forward, the two write “the efficiency, innovation, and speed of a digitally connected world can expand what is possible for everyone—including those who historically have been marginalized.”

They go on to say that “we urgently need to lay the foundations of an inclusive digital economy and society for all. We need to focus our energies on policies and investments that will enable people to use technology to build better lives and a more peaceful, trusting world.”

They aren’t just giving lip-service. The report, released on June 10, sets a concrete goal of connecting every adult in the world to a “digital network” by 2030. And that may leave you with a question: How can it be done?

“We need to look at this as a world and say we need to be investing in human capital and infrastructure,” Gates said during a panel discussion with Ma and UN Secretary-General António Guterres. “But infrastructure today is not just roads and water and electricity. Those things are absolutely important. We still need to push those, but it also means access to information.” 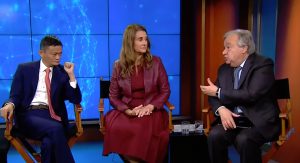 Do You REALLY Mean Connect Everyone?
The panel spent nine months consulting with governments, the private sector, international organizations, academia, technical communities, and others before arriving at the date by which they believe every adult in the world should have access.

“Developing countries and marginalized communities must have a voice in deciding how these technologies are used,” Gates said. “That’s how we can guarantee that, instead of reinforcing old problems, digital technologies are a source of new solutions.”

Each recommendation has a series of steps to be taken to reach that goal. For example, under “build an inclusive digital economy and society,” the report lists four steps. These include giving every adult affordable access to digital networks, as well as digitally enabled financial and health services; forming a broad, multi-stakeholder alliance to create a platform for sharing digital public goods, engaging talent, and pooling data sets; and enlisting the private sector, civil society, national governments, and others to adopt specific policies to support full digital inclusion and digital equality for women and traditionally marginalized groups.

“The internet should be for everybody, but today it’s not. Women are 40% less likely around the world to have access to the internet,” Gates said. “So, we have to look at special programming for women.”

Ma also touched on how jobs will be changing over the next few decades—as more positions become automated and the need for digitally literate workers grows—and the importance of providing access to small business around the world.

“This era is not the era of the competition of the muscles. It’s a competition of hearts, of brains, and of wisdoms. Today, small businesses are using the internet. They can compete anywhere with anybody,” said Ma.

UN Secretary-General Guterres said a new approach is needed and that it’s important to not go through the traditional bureaucracy of establishing an international convention and taking years to ratify internet rules. Instead, his hope is that the recommendations in this report will be used to inform and more quickly advance proposals that strengthen cooperation in the digital space.

“We need forms of cooperation. We need limited and smart regulation. And this can only be done bringing together all stakeholders—governments, businesses, the academia, the civil society—which means the multilateralism of the future will be different,” said Guterres. “We need multilateralism for the problems we have today, but that multilateralism needs to be inclusive. Only by cooperating together will be able to limit the threats that exist and the risks that exist and maximize the positive potential to make the digital era an era of progress and justice for the whole world.”

To learn more about the recommendations in the report head to digitalcooperation.org/report. To get a summary presentation of key takeaways from the report, click here to download it now.

WATCH: You can watch the full discussion with UN Secretary-General António Guterres, Melinda Gates, and Jack Ma on the report and recommendations of the High-level Panel on Digital Cooperation in the video below: